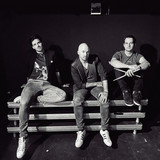 At the crossroads between Muse and Queen against a backdrop of geeky and cinematic universes, we present you Sea of Minds. This transcendent and epic Rock draws its strength from the unity formed by its three members. The triangle is composed of Gwen Le Roy (guitar / keys / backing vocals), Bastien Jaouen (drums / samples / backing vocals) and Bastien Milbeau (lead vocal & bass). Influenced by the 70's period of rock (Queen, Pink Floyd), current rock (Muse, Foo Fighters) and the sounds of synthesizers of the 80's (Depeche Mode), the world of Sea of Minds calls for surpassing oneself and increasing energy.