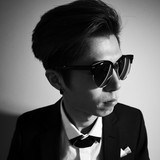 Debut album "1073" is released now.   Rex Wang (aka Rexhits) is a solo artist born and raised in Shanghai. Just like the city he grew up in, his music keeps a good balance between modern and retro, with a high degree of attention to detail. Every single track he made, from lyrics/music writing to production, then recording and finally mixing/mastering, he got every step done carefully in his studio. That’s what he calls “fidelity to music”, and his solid music background gives him the confidence to do so. Prior to his indie artist life, Rex Wang was a well-established composer/producer, he has worked with some high-profile clients such as BMW, Volkswagen, and Shanghai Media Group, and his compositional works have been performed in multiple cities all around the world.