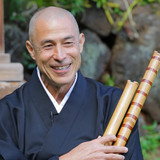 Riley Lee began studying the shakuhachi in Japan in 1971, and in 1980 became the first non-Japanese acknowledged as a shakuhachi Dai Shihan (Grand Master). He received BA and MA degrees from the University of Hawai’i and a PhD from Sydney University. Riley has released over 60 albums internationally, with nearly a million monthly listeners and streams on Spotify. He regularly performs in North America and Europe and throughout Australia. Riley is on the staff at Sydney Conservatorium of Music and is an Honorary Fellow at Western Sydney University. Riley taught at the University of Hawai’i for six years, and regularly lectures at universities in Australia and the USA. In 2018, he created and taught a class on mindfulness, meditation and music at Princeton University, where he is a regular guest professor. He frequently gives breathing workshops, including yearly 15-hour workshops over three days at Benediktushof, a famous meditation centre in Germany. Riley and his family moved to Australia in 1986. Riley and Patricia now reside permanently in Manly, NSW, overlooking the Pacific Ocean and Sydney Harbour.