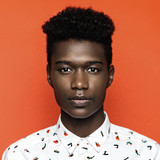 Born to Rwandan parents, the Belgian artist Amery fell in love with music while discovering Michael Jackson's Billie Jean video on MTV. His grandma then got the idea to gift him an African drum that ignited a spark in the heart of the little 5-year-old boy. That flame quickly grew into a fire when he brushed the keys of a piano for the very first time at church. Playing the instrument by ear, he immediately felt driven by the notes and developed a strong sensitivity. Breathing music from dawn till dusk, Amery realised soon enough that he wanted to be heard and gathered his courage to upload on Soundcloud a Rihanna cover which gained many positive reviews, much to his surprise. Learning from the great John Legend, Beyoncé, Stevie Wonder, Usher and the like rather than from sitting in a music academy, Amery perfected his craft, eventually finding his own sound. Listening to his inner voice, he decided upon graduation to focus exclusively on music with the full support of his mom who witnessed his dedication throughout the years. Determined to find a home for his talent, he actively reached out to recording studios and production companies before crossing paths with Weird !s Good, where he got a chance to develop as an artist surrounded by a passionate and understanding team. The connection with producer James Lowland was immediate. Together, they work on a series of pop gems infused with some urban and exotic flavours, aiming to put a smile on your face.