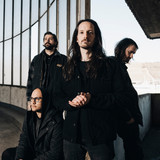 Progressive, avant-garde black metal experimentalists DER WEG EINER FREIHEIT have never stopped smashing through the boundaries of the genre they’ve called home since forming in early 2009. And with 2021 welcoming the release of fifth album, Noktvrn, the Germans are looking to expand the minds and perspectives of their ever-increasing fanbase, similar to how they pushed themselves in every element of the new album’s creation. The album will be released on November 19, 2021 via Season of Mist.