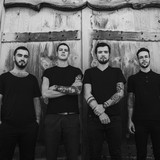 “hubris.” is a Swiss post-rock band originating from Fribourg. Formed in 2014, the instrumental quartet is characterised by their original style which blends an experimental touch of post-rock, electronica atmosphere and some elements of the metal scene. They draw their inspiration from bands like Jakob, This Will Destroy You, Tides of Man or Jon Hopkins amongst others. With their style evoking introspection, hubris. characterise themselves with the length of their compositions, allowing a range of evolving emotions through softness and power. Sometimes compared with other artists like Sigur Rós or Long Distance Calling, the band calls forth emotions of its audience due to a heterogeneous musical landscape mixing poetic ambiance and raw energy. In April 2017, hubris. came out with a second album called “Apocryphal Gravity”. This album sports a brand new set of colours. Their musical approach took a new turn with a drastic change in their method of composing. The band sets forth a musical style rarely explored to this day, breaching pre-established post-rock conventions by incorporating electronica influences. This album was critically acclaimed and aroused the interest of more than half a million eager listeners on the internet as well as being the subject of many press articles. The band is currently back in the studios preparing their third album “metempsychosis” which will be released in march 2020 through the Australian label “Art As Catharsis”.