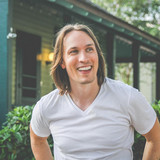 Native Nashvillian, Jimmy Nash, the son of 2 staff writers for Sony, was immersed in the Nashville songwriting scene from a very early age. He says, “I had a pretty good understanding of copyright law by the time I was 10, & I distinctly remember yelling at the radio saying, ‘You’re not supporting your hook!”’ Nash’s debut album, “The Road to 33”, blended Country, Rock, & Pop, & was produced by Todd Hannigan (Jack Johnson). It was featured as “New & Noteworthy” on iTunes, and the first single, “More Than Crazy”, was licensed for ABC Family’s “Jane By Design.”