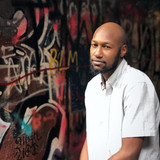 Originally from Washington, D.C., Brandon Mitchell is a vibraphonist and music educator based in North Carolina. He is currently an adjunct professor at Wake Technical Community College as well as a drum and piano private lesson instructor. Mitchell is making his mark in the music scene with his rhythmic and melodic tunes on the vibraphone. His music style can be described as conversational—he leaves enough space and room to breathe so the listener can easily follow along. Mitchell honed his musical technique while completing a Master of Arts in Jazz Studies at North Carolina Central University and a Bachelor of Arts in Percussion Performance at Elon University. Over the course of his career, Mitchell has performed in several states along the east coast including Florida, Georgia, Maryland, North Carolina, New Jersey, South Carolina, and Virginia. He has also had the opportunity to take his musical talents overseas. Mitchell graced stages abroad while touring in Italy, specifically at the Jazzit Festival, Teatro Piccolo in Milan, as well a Notte Bianca performance in front of the Duomo. He has also performed alongside some of the industry greats like Branford Marsalis, Joey, Calderazzo, Jon Metzger, and John Fedchock.