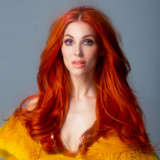 Bonnie McKee is a former teenage runaway turned self-made industry powerhouse. Moving from Seattle to Los Angeles at 16 on her own, her big voice, bright pop sensibilities, and evocative lyrical prowess landed her a sizable record deal on Reprise Records. Unfortunately, like so many legends before her, when her debut album didn't perform as well as the label had predicted, she was tossed aside and dropped. But the world hadn't seen the last of Bonnie. She went on to become one of the industry's most sought after songwriters, writing hits for the likes of Katy Perry, Britney Spears, Kelly Clarkson,

and Jason Derulo to name a few. Her songs have received 8 Grammy nods, and she's won dozens of BMI awards. But while writing ten #1 songs for other singers is an impressive feat, Bonnie is an artist, and entertaining is where her passion lies. She put out her own single, "American Girl", as well as an independently released visual EP, "Bombastic", and has accumulated over 50 million views on her brightly colored, wildly original music videos. Her electrifying live performances and carefully curated visuals have gained her a robust online fan-base, ever hungry for more.