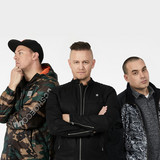 Ten ARIA awards; 6 consecutive #1 Albums; Sold Out Arena Tours and over 50 x Platinum accreditations throughout their career so far. The legacy of Hilltop Hoods is already undeniable. They helped propel hip hop as a local genre in Australia. In 2019 the band released their 8th and most recent studio album, The Great Expanse, the Highest Selling Australian Album of 2019 and has reached Platinum status. They toured as Main Support for Eminem's Australian and New Zealand Rapture Tour, headlined the prestigious Splendour in the Grass and toured as part of The Great Expanse World Tour, playing to over 100,000 people in 14 different countries. Hilltop Hoods have been a consistent and powerful live act throughout Australia, Canada, Germany, Austria, United Kingdom and Switzerland. As the music industry was decimated by the emergence of COVID 19 the band released the fundraising track ‘I'm Good?’ in May 2020,

with all proceeds from the song going to Support Act's 'Roadies (Crew) Fund' https://supportact.org.au/give-help/donate-now/ to assist road and support crew within the Australia music industry.