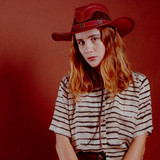 Hi, I'm Rae. If you're here, it's because you like magical realism books, driving on the open road, and americana music that sounds like Enya made a song with Aldous Harding at a dive bar in Montana. ~~Bio~~ Born on an island near Seattle, Rae Isla’s americana pop songs​ capture the turmoils and triumphs of being a young queer woman who’s unafraid of change. Rae got her start on the opposite coast in​ Brooklyn’s indie scene, collaborating on early releases with producer Gianluca Buccelati (Lana Del Rey

Arlo Parks), pop artist Dominique, and Lito de la Isla of the band Los Rumberos. She self-produced and released her first EP in 2018. After five years in NYC, Rae now divides her time between Brooklyn, Seattle, and Mexico City. Her debut album Another Life, made with Garrett Eaton (Holly Miranda, Gracie and Rachel), is a ten-track journey detailing the end of a relationship and the subsequent loss, exploration, and reinvention that happens afterwards. At times exuding warm earthiness and others biting introspection, Rae examines her own life while seemingly hovering just above it. Another Life sees Rae depart from her more pop-centric sound and settle into what she describes as her roots of folk, country, and americana. The album is featured in Rolling Stone MX, Country Queer, Complex, Popdust, Out Front, Los40 México and more. It charted #163 in NACC’s top 200.