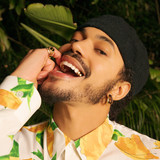 June Freedom is a Cape Verdean-American artist who embraces both his raw African roots and pioneering American spirit to drive his innovative and genre-bending art.

Though his dreams of being a performer started as a child, singing at his family-owned restaurant in Fogo, Cape Verde, it has been his experience collaborating with the world's greatest writers and producers, in the melting pots of New York City and Los Angeles, that led to his unique sound that fuses afro-beat, pop, reggae, kizomba/zouk, hip-hop, afro soul and alternative r&b. In recent years, the Latin and Afro music boom has dominated the charts with record-breaking revenue growth. So the timing couldn’t be better for June Freedom. Cape Verde is known for its blend of African and Latin cultures. So as an authentic artist who can speak English, Portuguese, Spanish, and Kriolu, it should be no surprise that he's been a highly sought after writer and producer by diverse artists like French Montana, Swae Lee, Mally Mall, Stacy Barthe, Sarz, Tekno & Nelson Freitas—to name a few. June Freedom is also the co-owner of Flight Club Music Group, a record label and mentor program focused on developing/connecting international artists, writers, and producers.