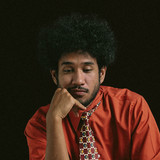 Teddy Adhitya is a storyteller, singer-songwriter, music producer, and traveller. Teddy began his music career as a singer for various artists/bands since mid-2000s. In 2016 he released his debut single as a solo artist, titled “In Your Wonderland”, to a critical acclaim and commercial success. Since then, Teddy has released two studio albums, “Nothing Is Real” (2017) and “Question Mark ((?))” (2019). As a singer-songwriter, Teddy has a strong foundation in pop music and R&B. His original songs often talk about love, relationships, and self-reflection. If “Nothing is Real” is an introduction to the world of Teddy’s musicality, “Question Mark” is the further deep dive into his exploration as an artist. In 2021, Teddy is swimming in a new, exciting uncharted waters with releasing a universe of storytelling consisting of three songs, an autobiographical story about celebrating life in the moment, letting go of the past, and being hopeful for whatever comes next in the future.