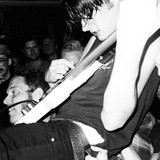 Lucern Raze is a project started by Luke Reilly, after he moved to Stockholm from London. The debut album "Stockholm One" was released in 2015 via PNKSLM, and met with acclaim from many respected media outlets, and saw the live outfit (featuring friends and regular collaborators Joel Webster & Krazy Krille) play all over Europe, UK, USA & Japan.   "Veering over to the pop-leaning end of the slop rock spectrum, it's definitely worth putting an ear to Lucern Raze" - PITCHFORK   "Sweden could do worse than claiming Lucern Raze’s slacker garage rock as its own vibe" - NME