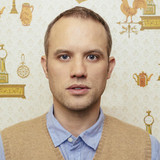 Gavin Castleton is a musician, songwriter and producer from Portland, OR best known for his diverse concept records. His album, Home, speaks directly to heartbroken horror fans with its clever re-framing of a break-up album as the byproduct of a zombie apocalypse. A Bullet, a Lever, a Key tells the story of an artist who “goes corporate” and abandons his creative outlet. What makes the record so impactful is that it unfolds reverse-chronologically, so that the consequences of his fateful life choice are revealed before the catalyst. Travelight, is a Little Prince-inspired allegory about religious conformity. Grace Land is told from the perspective of an unhinged Staples employee who attempts to get revenge for a humiliating experience at a family wedding. His hip-hop “micro-EP,” Weak Intl. Weak Intl., recounts the baldness-inducing frustration of five consecutive unproductive meetings at a flailing startup company. Castleton has recorded and performed with a wide range of acts such as The Dear Hunter, Bad Rabbits, Courtney Marie Andrews, Gruvis Malt, Ebu Gogo, Rare Futures, Lex Land and One Drop, and has toured for 20+ years supporting a wide range of acts like Wilco, Coheed and Cambria, Ray Lamontagne, Between the Buried and Me, De La Soul, Taking Back Sunday, Mos Def, Eisley, Patrick Stump and RX Bandits. He’s performed live on Jimmy Fallon (backed by one of his biggest influences, The Roots), as well as in-studio for LA’s legendary KCRW Morning Becomes Eclectic show.