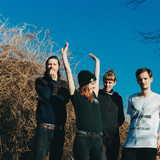 Petrol Girls are a feminist post-hardcore punk band, originally formed in London, with members from Austria, Lithuania and the UK. Now based in Austria but touring incessantly, the band are strong advocates of freedom of movement, anti capitalism and intersectional feminism. Rooted in a DIY music community that has always combined politics with punk rock, Petrol Girls are part of a counter culture challenging mainstream values like nationalism and the gender binary, and the oppressions that these ideals promote. With a diverse range of influences such as The Slits, Fugazi and Björk, and having had the pleasure to support bands such as The Dead Kennedys, Propagandhi, Anti Flag and Refused, the band are constantly developing musically as well as politically. Their music frequently toys with unusual time signatures and harmonic movement, with screaming and harsh angular rhythms to sad and desperate melodic moments or raging anthemic choruses. The Lyrics grow from direct experiences and genuine questions, pushing beyond repetitive slogans to provoke meaningful conversations about what we’re actually going to do to change something. Petrol Girls are named after Pétroleuses, mythical women of the Paris commune who allegedly set fire to private property with Molotov cocktails made from milk bottles, and rejected traditional gender roles. The inspiration came from a talk on Women and Protest given by writer Laurie Penny, who loosely translated Pétroleuses to Petrol Girls.