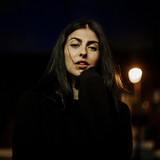 Hailing from Sydney, Anna Lunoe continuously breaks boundaries as a DJ, radio host, producer, vocalist and curator in the dance scene. Starting as a radio host on Australia’s FBi community radio, Anna quickly rose to prominence on the airwaves and soon emerged as one of the best DJ’s amidst Australia’s burgeoning dance scene. She released her debut Anna Lunoe & Friends EP, establishing herself as not only an exceptional DJ, but producer as well. From there she bounced one club banger to the next releasing on Fools Gold, Mad Decent, OWSLA, Ultra and Spinning’ while simultaneously becoming a crowd favorite in the USA live circuit, appearing at Coachella, Lollapalooza, & EDC Las Vegas, where she was the first solo female at to play the main stage. Amongst the many taking notice of Anna’s continuous climb and keen ear for the underground was Zane Lowe. He approached Anna to help launch Apple Music’s Beats1 platform. It was here that she debuted the HYPERHOUSE brand and radio show. 2017 began a new chapter in Anna’s life as she entered motherhood. She continued to produced and tour

through her pregnancy, headlining her own stage at Hard Summer’s 10yr anniversary at 8 months pregnant. 2019 shows no signs of slowing down for Anna as she goes into the year with the release of her