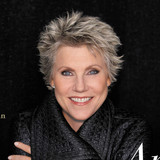 Anne Murray, is a Canadian singer of pop, country, and adult contemporary music whose albums have sold more than 55 million copies worldwide. Murray was the first Canadian female solo singer to reach No. 1 on the U.S. charts, was the first to earn a Gold record for one of her signature songs, "Snowbird" (1970) and was the first woman to win “Album of the Year” at the Country Music Awards in Nashville for her certified Gold album, “A Little Good News”. Anne Murray is more than just a Canadian icon. Her signature voice and time-honoured music are woven into the fabric of our lives. They comfort us and inspire us; they bring joy and uplift us. Her songs are forever in our hearts. During her illustrious career, Murray received four Grammys, a record-breaking 24 Junos, three American Music Awards, three Country Music Association Awards, and three Canadian Country Music Association Awards. She is a Companion of the Order of Canada, the highest honour that can be awarded to a Canadian civilian and in 2007 Canada Post issued a limited-edition Anne Murray Stamp. She has been inducted into the Juno Hall of Fame, the Canadian Country Music Hall of Fame, The Canadian Songwriters Hall of Fame, and Canadian Broadcast Hall of Fame, and the Howie Richmond Hitmaker Award from the American Songwriters Hall of Fame. Murray has a star on Canada’s Walk of Fame, the Hollywood Walk of Fame, and Nashville's Walkway of Stars.