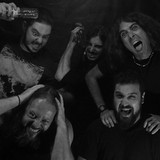 Featuring Destroyers Of All

Destroyers of All is a Progressive Death/Thrash metal band from Coimbra, Portugal, founded in 2011, signed to Mosher Records. The band’s sound is a blend of diverse musical influences from various styles ranging from thrash, death, and even black metal, to the hard rock and progressive metal styles. The newest album “The Vile Manifesto” is no exception. Following the evolution that started with the “Into the Fire” EP (2013) and the first full-length “Bleak Fragments” – both received high praise from reviewers worldwide – the band keeps pushing its own limits even further. “The Vile Manifesto” is their most straightforward and aggressive work to date, without compromising the craziness and the technical edge that always set the identity of the band. Having played consistently in Portugal and Spain ever since the band’s inception, including the most reputable festivals in their homeland, Destroyers of All is available for booking.