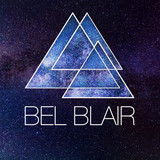 BEL BLAIR grew from an occasional performing duo into a five men strong band in 2018, musically drifting between atmospheric indie pop and groovy alternative rock, with a touch of melancholy - to create their own unique sound! The dense keyboard carpet, the psychedelic guitar solos and the multi-faceted, expressive polyphonic vocals of the two lead singers, are just one of the trademarks and immediately cast a spell to their listeners. Catchy, very atmospheric melodies alternate with expressive and dramatic sounds. BEL BLAIR stands for creativity, empathy, honesty and a genuine passion for music. No conformity and no masking, just pure authenticity! You can feel that during her performances and that's what makes her very accessible and real for the audience. The self-composed songs about nostalgia and transience, questions about the future and self-determination hit the zeitgeist of the audience. These are topics that affect everyone and invite everyone to dream, reflect and empathize. In 2019, the band won a regional competition in Rhein-Main. This was followed by numerous performances at festivals. In December 2019, BEL BLAIR released their first album with the same title. At the beginning of the new year 2021, the band released their latest single called "Illusion". For the year 2021, the band hopes to play the postponed and cancelled concerts. New singles and music videos will be made and released.