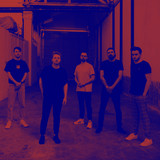 Aspiring from Germany, five-piece hardcore band The Narrator have come a long way in a very short time. After the five boys Fabian (Vocals), Rob (Bass & Vocals), Jan (Guitar), Tom (Guitar) and Fritz (Drums) formed as a band in 2017, they immediately made a name playing shows in and around their hometown Essen. In the first two years they won a renowned local band contest and shared stages with big players like Hatebreed, Secrets or Our Hollow, Our Home. They also played some well-known festivals like Essen’s “Pfingst Open Air” & “Nord Open Air”. After releasing their second EP called Dark Rails, The Narrator got announced as a support artist at Our Mirage’s 2020 Headliner alongside Vitja and Breathe Atlantis. Due to the Covid-19 pandemic, the tour got rescheduled after just 3 shows to be continued in October 2021. Their songs are just as straightforward as the band’s previous history: driving riffs and catchy refrains support the lyrics, which are dealing with inner conflicts and the burdens everyone must carry sometimes. While the lyrics mostly deal with personal issues, The Narrator are trying to contribute to accomplishing equal opportunities for every human being. Therefore, they started a Live: Charity Show for sea rescue NGO “Sea-Watch”. Supported by the audience, the band collected over €1,400 to help Sea-Watch saving lives in the Mediterranean. In 2021, The Narrator are about to show their fans what they got like they never did before. Stay tuned.