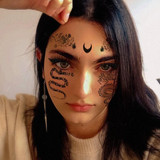 Zino Haro is a musician and designer based in New York City with strong ties to Guadalajara, Los Angeles, and Seoul. A member of the creative group Uni-Ke under Marca Ke, Zino joined the industries at the age of 18, initially as a vocal trainee for BSE, an on-and-off model, and then as a designer who presented a collection in New York Fashion Week the year after. Since then, Zino has starred in music videos for South Korean artist M. Park (KCON opener 2019) and has been featured in a few vocal collaborations, mostly around the East-West movement as conceived by groups such as 88Rising. Zino worked with the Carnegie Hall x Creative Expressions team in mid 2020, which solidified the official beginning of Zino's career in the music industry. Gen-Z MX - JP Zino also attended Columbia University's engineering school and holds some merit in the international cybersecurity/hacking space, having presented in Japan, the United States, China, and South Korea.