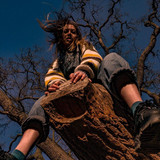 Hushed sounds, together with the weight of emotion, DIY aesthetics and a hazy voice symbolises Lily Rieke Marty which is clearly presented in her first release, ‘Not Cool To Be Cruel’ and in the second single, ‘Come Call Me Love’, both released in 2020. Down to earth, vulnerable, and communicative with her audience is Lily’s preferred approach. She chooses to be thoughtful and artistic with her music, and gets influenced by poets such as Patti Smith and Leonard Cohen and photographers such as Jim Goldberg and Larry Clark, as well as her spiritual outlook on life and search for meaning through relationships. Lily takes huge inspiration from the likes of Patti Smith, The Velvet Underground, Mazzy Star, Elliott Smith, L.A. Salami, Current Joys, and Told Slant; all known for their artistic approach to their sound. Now based in Berlin, new inspirations and challenges will influence Marty, who often is compared to folk and indie singers such as Joni Mitchell, Phoebe Bridgers and Lana Del Rey.  "Teen idler of story book endings, the poet with a rhythmical sense of reality and fantasies, grapple ominously with the hurt of relationships and the humanity of it all. A restful lullaby of griefs and confusions, an acceptance and penance for the plight of life, simmers in the words and intentions." - comeherefloyd.com