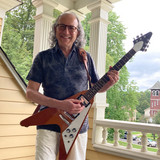 ~SPIROS SOUKIS~ ROCKIN’ BLUES WITH GREEK SOUL   "Soukis's high energy and versatility with the strings makes him a dangerous man." -- Blues Revue   Spiros Soukis, guitarist/singer/songwriter, creates tunes that are spiced with funky grooves, shuffle beats and rock elements enlivened with European style and the freshness of Mediterranean breezes.   His latest release the single "Rain and Tears” is A song about rebirth and hope, All things will pass! Soukis’s single “Feel Like a Superstar” was released in the beginning of the summer 2020 it was greatly received and earned him a new audience!   His acclaimed Greek Album release "I Magissa tis Arapias" on his Spotify profile Spyros Soukis! Released on July 1996 and remastered in 2000 is considered now, one of the best Blues - Rock Greek albums , and one of the worthy mentioning Greek recordings from the 1950`s till 2020 !