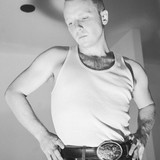 Pleasure Craft is the performance moniker of Toronto-based multi-instrumentalist, songwriter and producer Sam Lewis. In both theory and practice, Pleasure Craft is a blackboard on which Lewis chalks, erases, and chalks again. Over a handful of singles and two EPs—including the newly-released collection EP2—Lewis has so far used Pleasure Craft to cycle between dark, throbbing ‘80s yacht rock, neon new wave work-outs, and trippy synth-pop, all of which probe issues like addiction, masculinity and its attendant damages, identity and mental illness. His vocals are sometimes an Idiot-era Iggy Pop deadpan, sometimes an unhinged David Byrne cry, sometimes a controlled, acerbic baritone lilt that is all his own. But none of these sounds or touchstones are endpoints for Lewis, hence the unassumingly titled EP1 and EP2—simple titles that convey Pleasure Craft’s commitment to killing its darlings in the name of personal and artistic progress.