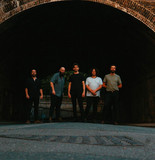 Born, bred and based in Stoke-on-Trent in the West Midlands, UK, an area with a strong working class ethic and the self styled “hub of Northern Soul”, Psyence have built their reputation from their hard working DIY ethic and endless touring. Their thundering self-titled debut album was released in August 2019 to critical acclaim. Uber Rock said "If the Foo Fighters managed to be impregnated by Pink Floyd and begot music producing offspring, they would probably sound something along the lines of Psyence. A strong release for a debut." Developing a fearsome reputation for their incendiary live shows, the band have become firm favourites at the Shiiine On Festivals (and Cruise), as well as having performed at Kendall Calling, Tramlines, and Festival No 6 Festivals in the UK, amongst others. Psyence have also supported notable rising tastemaker acts including Manchester-based alt-rock band, The Blinders, Australian rock band, Psychedelic Porn Crumpets, in addition to Saint Agnes and Warmduscher. Psyence released new singles "Tusk" and "Retrospect" in 2020, both contained on a new five track EP "Reality or Design", released on 19th March 2021. Their song "Cold Blooded Killer" was featured in US prime time CBS TV show SEAL Team, broadcast December 2020 in the US and around the world thereafter. Psyence are Steve Pye (lead vocals and guitars), Jamie (Jay) Bellingham, Joe Walsh (drums), Ben Nixon (keys and synthesisers) and Jamie Cartlidge (rhythm guitar and vocals).