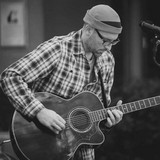 Musician and author, Noah James Hittner, was born and raised in the beautiful driftless region of the rural Midwest, where his work has led him to appear on both radio and network television. About Noah’s music… Despite being raised the son of a local Country-Rock legend, Noah procrastinated for well over a decade before finally picking up the guitar to begin the new year in 2009. Influenced by everything from folk-rock to hip-hop, Noah has recorded and released several albums which blend the singer-songwriter, acoustic, rock, urban, and electronic styles into a singular Acoustic-Tronic genre. This collage of influences creates a sound that begs listeners to feel something. Now based out of Madison and regularly touring southeast Wisconsin, Noah performs with the use of a looper pedal and various effects, creating a wildly entertaining, full-band sound. Noah’s 3rd solo album, "willing", was written, performed, recorded, mixed and produced entirely by Noah in his tiny basement home-studio on the blue-collar east-side of Madison, WI. This latest collection brings Noah’s talent for multi-genre music into focus using Blues, Folk, Hip-Hop, R&B, and Electronica to successfully paint a sonic canvas which not only emotes—but grooves hard. "willing" is available now on all major streaming and download platforms.