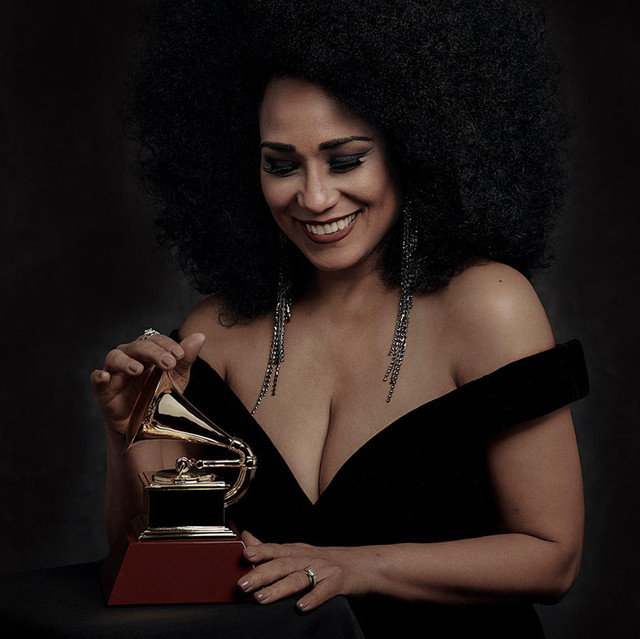 Aymée Nuviola, like the music from her native island of Cuba, embodies that magical blend of musical genres. Born in Havana, Cuba, into a family of musicians, some of her earliest memories are at the piano, working through melodies between lessons. Later, as she became a classically trained pianist and composer at the Manuel Samuell Conservatory, Cuba’s top music academy, she recalls her fascination with all kinds of music, from Debussy to Bossa Nova. Her sound is now highly influenced by the classical, American Jazz, Pop, Bossa Nova, Cuban Son, Bolero and Fílin genres. Known as “La Sonera Del Mundo”, Aymée, is one of the founders of the “Timba” genre and the first female to lead a “Timba” band around the world. Aymée has also had the honor of working with top icons in the music industry including Gloria Gaynor, Fania All Stars, Ruben Blades, Chucho Valdes, Irakere, Diego El Cigala, Omara Portuondo, Gonzalo Rubalcaba, and many others. In 2018, Aymée Nuviola, was awarded her first Latin Grammy for best Tropical Fusion Album for “Como Anillo Al Dedo”, and in 2020 she won her first Grammy for “A Journey Through Cuban Music”. While the world was paused during 2020, Aymée took her fans on a virtual journey to Tokyo, Japan, alongside Gonzalo Rubalcaba on their live album "Viento y Tiempo: Live at Blue Note Tokyo". Her latest project is a tribute to Colombian music bringing it together to her Salsa roots, "Sin Salsa No Hay Paraíso" is available now!