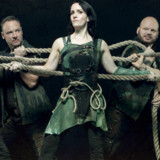 One of the more unconventional bands on the German metal scene, Van Canto is an a cappella ensemble that uses its versatile vocal skills to re-create the genre's heavy guitar and bass sounds. Formed in 2006, lead singers Dennis Schunke and Inga Scharf, "mimics" Stefan Schmidt, Ross Thompson, and Ingo Sterzinger, and the group's only actual musician, drummer Dennis Strillinger (later replaced by Bastian Emig), released a debut album, A Storm to Come, through its own label in the same year. Their unique covers of tracks by the likes of Metallica, Iron Maiden, and Deep Purple, saw them quickly become one of the festival circuit's most intriguing performers, and after signing a deal with Gun Records, they issued their sophomore album, Hero, in 2008. Tribe of Force (2010) and Break the Silence (2011) followed, as did appearances on records by Blind Guardian, Grave Digger, and Tarja Turunen.