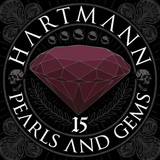 The history of HARTMANN started in 2005 with the debut 'Out in the cold', often reviewed as 'Album of the month' in a wide range of rock magazines all over the world. With the successful followers the band has meanwhile worked out their status as being one of Germany’s best modern hard rock bands that is offering international high-class Melodic Rock. Enjoying the good reputation as an outstanding live band they've been called to tour with rock legends as TOTO, HOOTERS, URIAH HEEP, EDGUY, MOTHER'S

FINEST, Y&T and others. After ’Hands On The Wheel’ - incl. the duet ’Simple man’ feat. Eric Martin (MR. BIG) and reviewed many times as the band’s best album to date