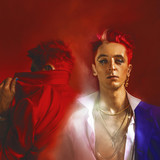 Denis Sulta—real name Hector Barbour—has rapidly emerged as one of the most exciting new prospects from the ever-fertile Glasgow scene. His unique sound has been carefully crafted having earned his stripes and a large part of his musical education and knowledge through working at the internationally renowned Rubadub record store, whilst holding down regular and ongoing sets at the world famous Sub Club, and releasing records on influential labels Dixon Avenue Basement Jams, Numbers, and his own Sulta Selects. Denis Sulta’s meticulous and diverse approach to dance music has seen his stand out capabilities reach incredible heights for someone still so young. A recent Mixmag cover-star, with support from the likes of Ben UFO, Four Tet, Bicep and Peggy Gou, he has recently joined BBC Radio 1’s Residency show alongside Jayda G, HAAi, Charlotte de Witte and Saoirse. His revered Sulta Selects shows have taken place across the globe. Now residing back in his hometown of Glasgow, after a long stint in Berlin, the prodigal producer has aligned with Ninja Tune for a new 8-track EP “Aye Spoake Te Sumwuhn & They Listenhd”, some of his rawest and deeply personal music to date. Inspired by the people and places who have guided and nurtured him on the path to where he is now.