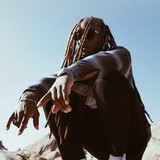 Ty Dolla $ign started racking up hits at the dawn of the 2010s, first with one of his many featured appearances and then with headlining singles on which his sly, explicitly hedonistic style of contemporary R&B was put on full display. After assisting the "worldwide underground" likes of Sa-Ra and Erykah Badu, Ty reached the mainstream through YG's "Toot It and Boot It" (2010), continued to gain hits as a collaborator, and as a solo artist narrowly missed the Top Ten with full-length projects such as Free TC (2015) and Beach House III (2017). Since then, he has topped the Hot 100 via Post Malone's "Psycho" and teamed up with Jeremih for MihTy (both 2018), and has issued his third LP, Featuring Ty Dolla $ign (2020). The singer, songwriter, multi-instrumentalist, and producer, born Tyrone Griffin, Jr. -- the son of Tyrone Griffin, a musician who played with Lakeside and Teena Marie -- started making moves during the 2000s in his native Los Angeles. As one-half of Ty & Kory, the younger Griffin appeared on Sa-Ra's The Hollywood Recordings, Erykah Badu's New Amerykah, Pt. 1: 4th World War, and Shafiq Husayn's Shafiq En' A-Free-Ka, as well as Black Milk's Popular Demand. He reached the Billboard Hot 100 for the first time in 2010 with YG's "Toot It and Boot It," for which he provided the hook. A pivotal moment, it preceded constant studio activity that resulted in solo and collaborative output issued throughout the decade. Griffin made his major-label debut on Atlantic in 2013 with "Paranoid," which eventually went multi-platinum. "Or Nah," the follow-up, became his second single to hit the Top Ten of Billboard's Hot R&B Songs chart, and quickly went multi-platinum. Additional singles and appearances on commercial and underground releases alike led to the November 2015 release of Free TC, his debut album. Dedicated to his incarcerated brother, the guest-loaded set debuted at number 14 on the Billboard 200, boosted by "Blasé," "Saved," and "Wavy," all certified gold or platinum tracks. During the next two years, Griffin branched out stylistically as an accessory to pop hits such as Fifth Harmony's "Work from Home," the Suicide Squad: The Album smash "Sucker for Pain," and Jason Derulo's "Swalla." Major Lazer and Nick Jonas were also among the artists who enlisted his services, though these pop and club efforts were balanced out with assists for the likes of Fat Joe, 2 Chainz, and Meek Mill. As lead artist, the commercial mixtape Campaign arrived just ahead of the 2016 U.S. presidential election and became a Top 30 hit, highlighted by "No Justice," a sober protest song recorded with his still-jailed brother. Beach House III, Griffin's second proper album, was teased with genre-hopping singles involving Lil Wayne and the-Dream ("Love U Better"), and Damian Marley and Skrillex ("So Am I"). It hit number 11 upon its October 2017 release. Griffin continued to excel primarily as a supporting artist for the next few years. Following a slew of collaborative one-offs highlighted by Post Malone's Hot 100-topping "Psycho" and Khalid's likewise multi-platinum "OTW," he and Jeremih partnered to jointly release the album MihTy. Griffin co-starred on well over a dozen tracks in 2019, such as Kehlani's "Nights Like This," Megan Thee Stallion's number 11 hit "Hot Girl Summer," and Skrillex's "Midnight Hour," the last of which was nominated for a Grammy in the category of Best Dance Recording. The same year, Griffin headlined a clutch of singles, and in 2020 continued with the charting "Expensive," joined by Nicki Minaj. He delivered the full-length Featuring Ty Dolla $ign that October. ~ Andy Kellman, Rovi