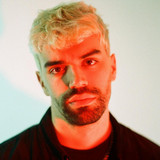 Vincent Goazempis, producer and singer with a minimalist approach, formerly half of the duo Saje, takes us on a journey where colors and shapes lead us to a rich and tasty horizon. His first solo project, Leos released in 2016, is an alternative electronic EP that speaks of love with lightness and refinement. From Pop, Soul, Electro, Jazz and Hip-Hop, Duñe has definitely found the recipe to spread soft and groovy vibrations. From various influences (Jungle, The Internet, Jamiroquai, SBTRKT, James Blake), we find behind Vincent's musical education ten years of music theory at the Paris Conservatory in addition to his classical guitar studies. His proximity to Crayon is obvious, and the two artists collaborated in 2016 on a first joint EP called "Duñe x Crayon". This project, combining Duñe's voice and subtle guitar with Crayon's jazzy synths. Four years later, they renewed the experience to release their first album "Hundred Fifty Roses". A more mature project, with numerous features (Swing, Aurélie Saada, Ichon...). Alongside this project, Duñe is very productive as he has collaborated internationally with Bibi Zhou & NoMBe and also produced renowned artists of the French scene such as Swing, Angèle or Julien Granel. Finally, Duñe also plays a lot with several tours in Europe and Asia, as well as concerts in Canada and Mexico. __ Management / Booking : antoine@divine-musique.com PR : manuel@iseecolors.fr