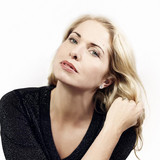 "Sweden`s best vocalist" DIE WELT Swedish jazz and pop vocalist, Viktoria Tolstoy is a much celebrated performer in Europe. An artistic disposition runs in her family, Tolstoy`s great-great-grandfather was the legendary Russian novelist Leo Tolstoi. No wonder young Viktoria made an impact in Stockholm jazz clubs with leading Swedish musicians like Svante Thuresson and Putte Wickman. She recorded her first album in 1994, aged 20. Two years later, with the album För Älskad, she became an overnight pop sensation in Sweden. This prepared the ground for her collaboration with Esbjörn Svensson, who produced and wrote the songs for White Russian, the first Scandinavian album released by the legendary Blue Note label. Around that time Tolstoy also worked with Nils Landgren, and in 2003 she followed him and Svensson as an exclusive ACT artist. Since then, she has established herself as one of the leading voices in jazz today with some chart-topping jazz albums like Shining on You (another collaboration with Esbjörn Svensson), My Swedish Heart and My Russian Soul. Known for her lilting, emotive style, she has also worked with McCoy Tyner, Benny Andersson, Jacob Karlzon and Iiro Rantala, crafting her unique crossover jazz, pop, and folk sound. Crystal clear, dynamic, untamed and vibrating, but also down-to-earth - her voice is probably the most brilliant of all Scandinavian singers. If Tolstoy sings a song, it is not simple interpretation; she shapes and marks it in her own way.