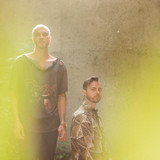 Since 2010 DiRTY RADiO have been crafting a satisfying synthesis of dance, R&B and electronic music. With their diverse musical influences, the multi instrumentalists and producers have been working tirelessly in their studio, racking up impressive Spotify and Soundcloud numbers and dropping tracks with international labels such as Spinnin', Mad Decent, Majestic Casual and 604 Records/Sony Music Canada. The group consists of lead vocalist/songwriter Shadi and producer/ songwriter Waspy who are known for their high energy live show. Behind the scenes, they work closely with founding partner producer/mixer Anthony Dolhai. To date, the group has released three full-length studio albums, one EP, and a slew of singles and vocal remixes.