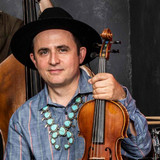 kes Creek formed in 2017 with the chance encounter of 3 musicians, Korey Simeone, Mark Sanfilippo and Gabe Davis. Combining great songwriting, bluesy vocals and virtuosic instrumental skills of Simeone and the driving rhythm section of Sanfilippo and Davis, the 3 recognized the unique power of the acoustic trio. Later adding Thomas Moose on guitar and mandolin and Cori Cable Kidder on co-lead, IKES CREEK took 1st place in the Best Band Category at the Topanga Banjo Fiddle Contest. ​ ​Born on Elk Butte in Northern Idaho, Korey Simeone long honed his craft as both a virtuosic instrumentalist and accomplished songwriter. Finding his way to Austin, Texas in 1997, he toured internationally with both acclaimed neo-vaudeville outfit, The Asylum Street Spankers and nationally recognized bluegrass satirists, The Austin Lounge Lizards. He has opened for or shared the stage with such luminaries as Dolly Parton, Earl Scruggs, Ralph Stanley, and Bela Fleck, just to name a few. Moving to LA in 2010, Simeone continued his musical endeavors, flowering his vision to form an acoustic band with all the musicality and power of his heroes, Jimi Hendrix and Ludwig van Beethoven. Ikes Creek marks a new philosophy in the Americana genre. Inspired by the vision of Korey Simeone, Ikes Creek ​espouses a total commitment to authenticity coupled with an unbound sense of adventure, a forward vision of what acoustic music can be.