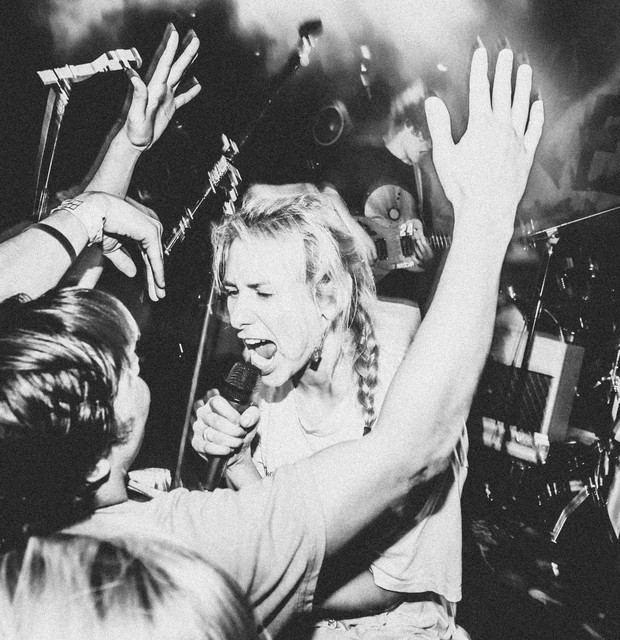 Gymshorts is from Rhode Island and like the band’s home state frontwoman Sarah Greenwell is a petite powerhouse that marches to the beat of her own drum. Endearingly rebellious, fiercely independent, and hellbent on causing a commotion, Greenwell embodies the kind of rambunctious unpredictability that has personified some of pop culture’s most legendary troublemakers; a little bit Bart Simpson, a hint of Kevin McCallister, and a dash of Dennis The Menace form the inspirational foundation of Gymshorts’ particular brand of punk n roll, smoked to perfection in the back of Jeff Spicoli’s van. Gymshorts are a sarcastic grin and a pair of bloodshot eyes behind pitch-black Wayfarers in the back row of class, a best friend and a bad influence all rolled into one. Their sound is ragged and raw and immediately magnetic, rough and tumble with the kind of lived-in authenticity of a scuffed-up pair of skate shoes. A sturdy platform for the band’s unabashedly unique identity that is equal parts bratty and wise, tightly wound and poised to launch in nearly any direction at a moment’s notice. As buoyant ambassadors of plucky stick-it-to-the-man attitude, Gymshorts never fail to leave crowds sweaty and satisfied in the aftermath of a ferocious blitzkrieg bop, decimating eardrums in a whirlwind of maximum volume sonic debauchery with an enthusiastic heart of gold.