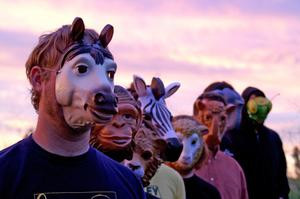 The Sound Of Animals Fighting

Featuring The Sound Of Animals Fighting

For the purposes of mystique (and, one assumes, legal reasons due to the various participants owning recording contracts), the experimental noise rock collective the Sound of Animals Fighting appear in public only in cheap creepy cute children's Halloween masks with cartoon animals on them. Furthermore, the members of the band -- really more of an always shifting musical collective in the manner of Broken Social Scene -- are referred to only as the animals their masks represent. Therefore, their debut album, The Tiger and the Duke, lists the Walrus, the Lynx, the Bear, the Nightingale, the Ferret, the Armadillo, the Hyena, the Octopus, the Skunk, the Llama, the Swan, the Dog, the Raven, the Tortoise, and the Tiger as participants. As gimmicks go, it's a good one. Of course, in the age of the internet, no secrets stay that way for long. It's generally agreed that the leader of the Sound of Animals Fighting is singer and producer Rich Balling (the Nightingale), formerly of the southern California ska-punk act RX Bandits, and that 2005's The Tiger and the Duke was recorded by Balling in an unconventional manner that owes something to John Cage's theory of indeterminacy and Frank Zappa's late-era methods of mixing live recordings made in different times and places into a single piece of music. Supposedly, the album was recorded under Balling's supervision by placing musicians, one at a time, into the studio and having them improvise freely for a predetermined length of time without hearing any of the previously recorded instrumental tracks, all of which were eventually mixed into the completed album by Balling. Furthermore, Wikipedia and other online sources claim that Balling's fellow musicians on this album were fellow ex-RX Bandits members Matthew Embree (the Walrus) on guitar and Chris Tsagakis (the Lynx) on drums, Finch's Randy Strohmeyer (the Tiger) on guitar, and Derek Doherty (the Tortoise) on bass, with Matthew Kelly (the Llama) of the Autumns, Rich Zahniser (the Armadillo) of the Hippos, and Anthony Green (the Skunk) of Circa Survive on vocals, and Chris Fudurich (the Bear) on keyboards and programming. (The remaining six listed members were responsible for behind the scenes roles in recording, artwork and public relations.) The collective's more accomplished second album, 2006's Lover, The Lord Has Left Us (Equal Vision), contains more structured elements alongside the free improvisation, including Karlheinz Stockhausen-inspired musique concrète, female Sanskrit singing, and passages of Italian opera. A slimmed down lineup includes Balling, Embree, Tsagakis, Green, Kelly, and two new singers, Keith Goodwin (the Penguin) of Days Away and Craig Owens (the Ram) of the Chiodos. Members of the group convened at the House of Blues in San Diego, Hollywood, Anaheim, and Las Vegas for four shows in late August that year for what were billed as the band's only live performances ever. ~ Stewart Mason, Rovi