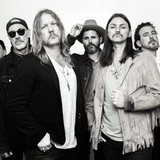 If Down to the River was the sound of the band’s combustible sparks igniting, then Bless Your Heart is their bonfire, built for the summer of 2020 and beyond; a double-album follow-up fueled by road-forged camaraderie and telepathic musical intensity, vibrantly reflecting the individual and collective experiences of these seven, all drawing inspiration from the band’s symbolic hometown- a place Devon Allman calls “the United States of Americana.” A conflagration of influences and invention, confidence and ambition, Bless Your Heart captures a vast, panoramic scope throughout a baker’s dozen of modern rock.