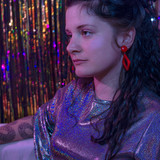 Described by Rrampt Magazine as “…an exploration of the ethereal”, Missy Bauman creates folk music with fangs. Though accompanied often by an acoustic guitar, Bauman’s music is more “anti-folk” than traditional – with lyrics that may catch you off-guard with intensity, vulnerability, the occasional blush-worthy remark, and deeply personal truths. What keeps Missy’s music “folk” is the value she places on the simplicity of good songwriting – bravery, an acoustic guitar, and honest storytelling. Originally hailing from Brantford, Ontario, Bauman was discovered by a local festival director at a highschool coffee house, who described her as “…a true artist, fiercely committed to her writing, singing, and playing”. As if accidentally, she entered the music scene at 17, sharing stages with Emmylou Harris, Gord Downie, and Feist. After winning two Hamilton Music Awards, she abandoned her bachelor degree dreams, and left to study music in Toronto. Fans of Hannah Georgas, Dan Mangan, and Big Thief will find a new favourite artist in Bauman, making space for uncomfortable feminism in the singer-songwriter genre, with decided gentleness and vulnerability. “Two Sisters" which appears on her sophomore album 'Sweet’ (2020), won a Songs from the Heart award presented by Folk Music Ontario, was a Folk Category finalist in the International John Lennon Songwriting Competition, and received a nomination for the Slaight Emerging Artist Award from the Canadian Songwriter Hall of Fame.