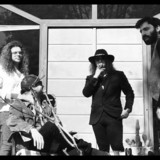 "Like Led Zep, they’re versatile and can go from hard rock with “you better make me groove” to softer folk with “let it bleed". so far, their releases have been very promising and i can’t wait to hear more from them. definitely looking forward to a full album from this hard rock band."

crazyonclassicrock.com Howlin May Queen is the four piece-rock band founded by Simon Hurts (guitar) and Daniel Ocean (vocals) in London in 2017, the band is comprised of P.J. Fonda (bass) and John Thorne (drums). Their sound sets its roots in the influence of the '70s blues rock bands, spacing from folk acoustic songs to guitar driven heavy rock. From their rising, they managed to release 2 Eps on Spotify reaching more 50k streams, recording a live Ep at the iconic "Abby Road studios" and performing more then 30 concerts between the most famous clubs and theatre of London. In September 2021 they will release they' re debut album "Tapes from the white ballroom" on both digital stores and vinyl.