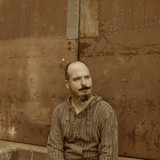 Pablo Naranjo is a multi-instrumentalist, composer and producer whose career spans over twenty years. Originally from Colombia, he recorded his first EP at the age of 17 with rock band Séptimo Aposento (The Seventh Room) which performed at large rock festivals in South America in the late 90s, early 2000's. Upon moving to Melbourne, Australia in 2004, Pablo formed Orbeum, a classical/jazz instrumental guitar duo which recorded the album 'Passages' in 2009 with members of the Melbourne Symphony Orchestra. Numerous tracks from this album have been featured in advertisements and documentaries. 'Here in the Distance' (2013) and 'Black Euphoria' (2017) were Pablo's first albums as a solo artist

highlighting Pablo's love for 90's alternative rock and were described