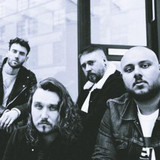 The rapid success of Mallory Knox’s debut album ‘Signals’ saw them reaching #35 in the UK Official Album Charts. Their second album ‘Asymmetry’, and latest album release ‘Wired’, have granted them two times consecutively the coveted Top 20 in the UK official Album Charts. All of Mallory Knox's singles to date having reached A-list level on MTV Rocks,

Kerrang! and Scuzz TV, alongside numerous nominations at the Kerrang! Awards which has cemented them as one of the best upcoming UK Rock bands in the UK. They have played numerous tours of their own, with sold out nights at prestigious venues such as Electric Ballroom, KOKO and Roundhouse, as well as having supported bands such as A Day To Remember, Bring Me The Horizon, ONE OK ROCK, and Sleeping With Sirens. Music is everything to Mallory Knox. They love it so much that on the creation of their new self-titled album they didn’t want to stop writing it. Over five different sessions and 14 months of recording the band worked tirelessly, never happy with what they had and always confident that the next song they write would be even better than the last. To listen to these 12 slices of riff-wrangling majesty is to hear Mallory Knox in their truest and most cohesive form. Stripping things back to the bare basics of song-writing and not adhering to whatever sound that the people around them wanted them to make, this is classic-in-the-making British rock for the masses coming straight from the heart.