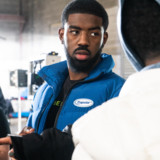 Tion Wayne is the North London cult hero climbing the mountain to the top of UK rap royalty. Making his breakthrough in 2014 with debut mixtape Wayne’s World, the icon from Edmonton effortlessly dissected his experiences of trapping, the street life and run ins with the law. Later, Wayne’s World sequels in 2016 and 2019, via 2017’s Transition EP, would further Tion’s standing in the scene, keeping the streets fed and cultivating his now undeniable status as a staple in UK rap today. His musical dexterity has been proven over a myriad of sounds, from UK drill anthems such as one of 2020’s best, ‘I Dunno,’ and ‘Keisha & Becky’ with Russ to assist on hits such as NSG’s Afroswing-leaning ‘Options’. In a relatively brief time, Tion has racked up multiple UK Top 10 singles, over 500 million streams, frequent radio play on BBC Radio 1 and 1Xtra and placement on the popular Spotify playlists Hot Hits UK, Rap UK and Who We Be. Critical acclaim followed in 2020 with his GRM Rated Award win for Track Of The Year for the colossal ‘I Dunno,’ proving just how far Tion’s music has travelled and inspired.