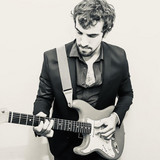 Federico Verteramo is a guitarist and singer from Buenos Aires, Argentina. He has two albums released as a soloist, "Verteramo Trio" and "EuropaBluesTour", and three EPs, which have led him to play in more than 15 countries such as Brazil, Mexico, Uruguay, Chile and consecutive European tours since 2015, performing more than 100 concerts in Austria, Germany, France, Belgium and Spain among others. In addition to his work as a soloist, he has participated in record productions of other projects such as Easy Babies, Ximena Monzon, Junior Binzugna, Nacho Ladisa and Mississippi musician Dave Riley. As a session musician, he has played in the tours in South America of musicians such as Rip Lee Pryor (USA), Tail Dragger (USA), Dave Riley, as a member of the Blues Special Band by Adrian Flores and in the role of musician / producer with Dylan Bishop (USA) and Jörg Danielsen (Austria) www.verteramofederico.com