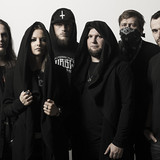 Featuring Be Under Arms

Be Under Arms is a Russian band which plays a Groove base with some Metalcore and Melodic Death Metal influences. Outstanding features of the band is the tandem of male and female vocals, themes of social and military orientation, postapocalyptic atmosphere and a modern urbania. Band already has 4 full-length albums, a huge number of concerts, including 4 European tours. Be Under Arms shared the stage with Butcher Babies, Jinjer, Caliban, Infected Rain, Black Bomb A, Smash Hit Combo and many others. New album Red Wave Is Coming released on April 5, 2019.