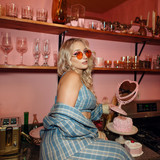 With her evocative voice and ability to bring her stories to life in vivid detail, Juliana Hale has established herself as one of the most unique and promising talents in indie-pop. Since embarking on her first tour at age seventeen, she has performed all over the country and shared the stage with some of the most recognizable names in music. Juliana is a true renaissance artist, combining her multi-instrumental and vocal abilities with a love of visual arts to create an unforgettable, immersive experience. After years of devotion to her craft, Juliana has begun to see a surge in her popularity. Recent highlights include high profile appearances at festivals including Ubbi Dubbi, Breakaway and Number Fest, as well as an opening slot for Snoop Dogg at a Fourth of July show and opening for Flo Rida at Leather and Laces. She has been on a creative hot streak since 2020, releasing a slew of increasingly well received singles and being featured an ever-growing number of playlists. In the crowded world of modern singer/songwriters, Juliana’s emotionally direct storytelling and vintage aesthetics set her apart. She is an exceptionally versatile writer, capable of summer party anthems, emotionally intense ballads, and everything in between. Additionally, she has begun popping up in several independent films, proving that her artistry isn’t limited to the stage. Be on the lookout for her next single "Crazy" feat. Derek Minor out September 17th :)