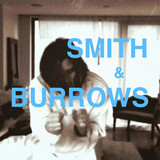 Smith & Burrows, a collaboration between Tom Smith from the Editors and Andy Burrows from Razorlight and We Are Scientists, came to fruition after numerous house sessions between the two friends. What began as a holiday-themed lark eventually blossomed into a full-blown project, and by 2011, the pair had constructed an eclectic collection of Christmas songs, both traditional and original, that played against the season's predictable yuletide spirit by introducing a little darkness into the mix. The resulting Funny Looking Angels, which included a guest vocal from Danish singer/songwriter Agnes Obel, arrived on November 28, 2011. ~ James Christopher Monger, Rovi