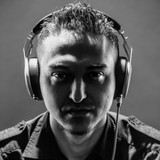 Risen and Resurrected from the ashes after a 6 year hiatus, and returning to form in 2010, DJ PHOENIX first released a free album 'Free and Easy' in early 2010. Upon receiving many positive responses on the album, he decided to put out a more focused electronic album and released it in late 2010 via iTunes and CD Baby called 'From Scratch EP'.  Not one to slow down and let momentum or opportunity slip past his fingers, DJ PHOENIX released a full length experimental album consisting of Electronica and Orchestra related songs in an album (March 2011) called 'Off The Grid. The response has been overwhelming and extremely positive as people have stated to have been able to hear a story and evolution of style from the 1st album to the 3rd.'  DJ PHOENIX has spent years fine-tuning his winning formula in the only way he knows how, by feeling the vibe at some of the most popular DJ shows in the world, and then dispensing musical epiphanies whenever he creates a song.  Simply unstoppable, now is the rise of the PHOENIX, bringing you an energy that is totally, and uniquely, full of fire.