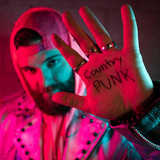 Manny Blu has always done things his own way. Years before unveiling his country-punk sound with songs like "'95," the larger-than-life vocalist grew up in Montreal, finding different ways to challenge the status quo. He trained for a career as an MMA fighter. He embraced country music. And when a move to Nashville placed him at the geographic epicenter of the genre, he shook things up once again, creating a musical hybrid that blended the storytelling of country, the hard-charging guitars of rock & roll, the anthemic melodies of pop, and the raw rebellion of punk. Unable to hit the highway in support of his 2020 sophomore release, New Ink, Manny and his band of country-rock road warriors remained in Nashville, recording a string of COVID-safe performances at H.O.M.E in East Nashville. Those recordings form the ongoing "Live & Turned Up" video series. Filled with attitude, amplification, and plenty of country-punk punch, "Live & Turned Up" captures Blu at the top of his game, performing a mix of original songs, fan favorites, and unexpected covers while the camera rolls. It's been years since Manny Blu stepped into the ring as an MMA trainee. These days, he's fighting for something different, delivering knockout blows with a sound that's distinctly his own. Hard-hitting and aggressively unique, Manny Blu's country-punk anthems are the soundtrack to a career that's forever on the rise.